Witch to Death - A Magic and Mayhem Story 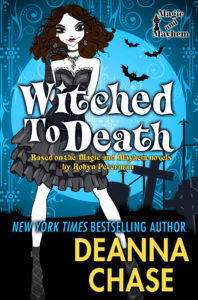 Witched to Death – A Kindle World offering featuring Ida May from the Pyper Rayne novels is here!

Available only on Amazon US

Witched to Death was written for the Magic and Mayhem Kindle World by Robyn Peterman.

There are worse things than being a ghost summoned from New Orleans to Asscrack, West Virginia… especially when you wake up mortal, naked, and in the arms of the oh-so-sexy Diesel Jacobs.

Diesel Jacobs is the new wolf in town. Plagued by a curse that leaves him shiftless, he seeks out Zelda, the healer of shifters, for help. But when her spell to cure him produces Ida May, his former sort of girlfriend, suddenly he has a lot more problems than being unable to shift.

Still smarting from being dumped over a hundred years ago, Ida May is in no mood to help…and unfortunately for Diesel, she’s the only one who can get his shift back.

Are you asking, “What is a Kindle World?” If so, I have answers:

It’s basically fan fiction written by authors Robyn stalked, blackmailed, and bribed to write in her world! KIDDING! We have happily written brand new stories using her world and some of her characters along with some of our own. And let me tell you…the results are hilarious!

For those of you who prefer a more mature and succinct answer…
Kindle Worlds is an Amazon exclusive program. The titles written for the world can NOT be purchased at other ebook retailers or anywhere besides the Amazon US site, but they can be read on any tablet, computer, or smartphone using the free Kindle App.

Want to know, “Who is Robyn Peterman?”

Awesome! Glad you asked. I met Robyn online after forming a writers’ group for laugh-out-loud paranormal reads. After devouring her books, I’ve become a life-long fan. And let me tell you that writing in the Magic and Mayhem world has been the most fun I’ve had in ages… well, the most fun with my clothes on, that is. Yep. It was that good.

How to Train a Witch – Donna McDonald

The Lie, The Witch, and The Warlock – Renea Mason

The Witch Is In – Rose Pressey

When You Witch Upon a Star – Melanie James

Witch and Were – Eliza Gayle

Witch in the Attic – Claudy Conn

Witchin’ in the Kitchen – Kris Calvert